↓ Skip to Main Content
Home › Philosophy › Why do I do it? 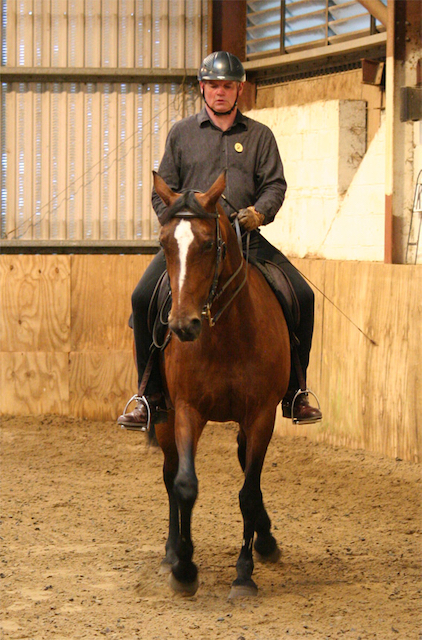 Over the last few days I’ve been reflecting a lot on why I do what I do and I guess it all goes back to my youth.

Back in the day, “when I were a lad”, I was absolutely hopeless at sport. Sport, in those days, basically meant a quick game of football in the primary school playground, using our jumpers for goalposts.

It was a not a game at which I excelled, something that was quickly noted by my classmates.

I soon got used to being the very last ‘pick’ any time time teams were chosen. And so began a daily routine of ritual humiliation that lasted until I eventually figured out that ball skills were just not my forte.

The transition to senior school had offered me the chance to try my hand at something new. Rugby; still a kind of football but played with a funny-shaped ball that seemed to have a mind of its own and could bounce in any direction (except the one I expected). But it brought with it a whole new bunch of secret rules and challenges.

I still vividly remember running on to the pitch for my first ever taste of the game with a vague expectation that someone would explain to me how to play it. No such luck! Although I hadn’t a clue what I was doing, the whistle blew and I wasted no time, grabbing my first chance to run at the opposition with the ball in my hands.

As my much more experienced opponent crouched and readied himself for what I’m sure would have been a textbook tackle, I made what seemed to me the obvious move and leapt clean over his outstretched arms. I accelerated away towards the posts at the far end of the pitch, my brand new blue and white-striped rugby shirt billowing in the wind, scarcely able to believe what a natural I was.

Within seconds, my dream start was shattered by a shrill blast of the referee’s whistle calling me back for ‘jumping the tackle’. This proved to be just the first of several hundred unwitting misdemeanours I committed while ‘learning’ the game as late autumn turned to winter and eventually into the spring of 1979.

The following year, I discovered through a strange twist of fate that some of the older kids at school took part in something called rowing (or ‘crew’ if you are reading this in North America). For the uninitiated, rowing is a sport that consists of teams of people who like getting up incredibly early every morning and propelling a very narrow, fragile, lightweight racing boat across a stretch of water using nothing but very hard physical effort until they feel sick. I loved it!

The strange twist of fate I mentioned was a kids TV programme that ran in the UK during the long school summer holidays in the late 1970’s and early 80’s. Its full title, “Why Don’t You Switch Off Your Television Set And Go And Do Something Less Boring Instead?” gives you a good idea of the motivation behind it. My imagination was captured by a short feature they ran all about ‘coxing’.

For those of you who haven’t explored the joys of rowing, coxes are the little people who sit at one end of the boat. They control the boat’s speed (by telling the rowers to apply more or less effort) and direction (by pulling the strings on an astonishingly tiny rudder, about the size of a postage stamp). It’s also generally accepted that a big part of the cox’s role is to take the blame for anything that goes wrong in racing or training while getting little to no credit for anything at all that goes well… but I digress.

Looking back, I realise now that one of the main reasons I ended up loving the sport was that no-one is born knowing how to ‘play’ it. Unlike every other sport I’d ever attempted til then, no one expected me to just know what to do. Everything had to be explained.

The first thing that was explained to me was that, at about 6 feet tall, I didn’t quite fit the definition of ‘little’. My dreams of coxing were about to be smashed before they’d even begun! There was some good news though. At about 6 feet tall and naively enthusiastic with long arms and legs, I did fit the description of someone who might turn out to be quite good at actually pulling on the oars.

I won’t bore you with the blow by blow details of my career as an oarsman. Suffice to say I took to the sport like a proverbial duck to water and enjoyed a good deal of success over the next 10 or so years. That then led me to a lifelong career in coaching and teaching sports that included the 1996 Olympic Games.

But none of that would have been possible without the patience and skill of my early coaches. I’m forever grateful to them for taking the time to explain to me what to do, how things worked and how to get along with some mighty impressive beasts who formed the rest of my crew.

While full of good will, enthusiasm and awesome physical potential, it turned out my new crew mates also had high standards wanted to make progress. They had an appetite for speed and success, plus the sheer joy that rowers get from the feeling of a boat moving well.

They didn’t take too kindly to my inevitable beginner’s mistakes such as nearly putting my foot through the paper-thin hull of the boat the very first time I climbed aboard or almost capsizing us with frustrating regularity each time I caught a dreaded ’crab’.

The worst of all my crimes, though, was almost impaling the kidneys of the guy directly in front of me with the handle of my oar any time I lost the rhythm of the movement as a whole as we placed out oars into the water and unleashed our full strength and power to drive the boat onward.

Which brings me back to where I started: why I do what I do now.

The good coaching I received back in my early days as a rower enabled me to experience a level of fun and enjoyment in sport that I couldn’t even previously imagine. Over the years, I’ve since had the chance to try my hand in a wide range of activities. I’ve chosen to immerse myself in some that I really love in the hope of eventually mastering one or two – including, of course, riding and training horses.

Each time I took on something new I was always keenly aware of the need to get some good advice from someone who really understood what worked and what didn’t. As someone born with the ‘coaching gene’ myself, I’ve always felt a deep compulsion to then share what I’ve learned with others, in the hope of making their own road to the success they want just that bit quicker and more enjoyable.

In all the years that I’ve been riding and training horses (another sport that involves getting along with some mighty impressive beasts full of good will, enthusiasm and awesome physical potential) I’ve been struck – and more than a bit concerned – by how often the emphasis is put on bravery and blindly following tradition.

Just like my early experiences on the football and rugby pitch, it’s often as if horses and riders are just expected to know what to do and how to do it – which makes the experience so much more more stressful and less enjoyable for all concerned.

Thanks to the example my early coaches set for me, I’ve spent decades learning how to unearth the straight answers, clear explanations and practical direction that I needed to understand how to make consistent progress in my own riding – and how to do it in a way that makes my four-legged teammates happy.

As a riding teacher, I’ve made it my mission to do what I can so that it doesn’t have to take that long for you…

We use cookies to enhance your experience. By continuing to visit this site you agree to our use of cookies. More info